“I am seeing the world today through my dog's eyes and more particularly, her body”.

“I am seeing the world today through Bramble’s eyes and more particularly, her body”.

Bramble the Springer Spaniel is a 13 year old rescue who has twice broken an elbow but recovered well and remains very active and up for a walk.  Since the end of last year, however, she has displayed a limp on the other front leg.  She was examined by the vet who found nothing sinister but concluded that the findings were consistent with osteoarthritic change in both elbows.  The other front limb joints appeared to have no issues.

Her Mum wanted to learn how to help with manual therapy to keep Bramble as fit as possible.

Bramble was unsure about anyone touching her so, as her Mum is going her new therapist, I brought in our demo dog.  While I was working on that model, Bramble’s Mum was copying me on her.   That worked perfectly and Bramble settled down in no time – after a good sniff of the demo dog.

Her Mum found that most of the muscles on the left hand side were more prominent that those on the right.  Bramble had clearly been compensating for a while.  She’d also developed tighter back muscles from about half way down – again likely due to over-compensation.

This gave a good starting point for a massage plan to help ease the extra strain on the left while pumping up the tone on the right.  The Re-Balance Bramble Plan.

She thoroughly enjoyed the work her Mum was doing, repeatedly giving us extra cues by shutting her eyes and resting her head down in pure bliss.

Her Mum wrote “……we had such a helpful and informative session.  I am seeing the world today through Bramble’s eyes and more particularly, her body.  Thank you so much – I am very hopeful of being able to help her…I also think she is going to really love it”

I think so too. 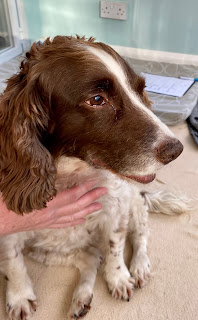